Shooting sensation, an MBA student at Lovely Professional University, Amanpreet Singh has once again showcased his distinct shooting deftness by clinching Gold Medal in the mixed team 10 meter air pistol national event. Occasion was ongoing 61st National Shooting Championship at National Games Shooting Range at Thiruvananthapuram in Kerala. The event was governed by International Shooting Sport Federation (ISSF) and National Rifle Association of India. Worth informing, the mixed event has been introduced worldwide recently by the governing body ISSF in order to comply with the International Olympics Committee's gender equality policy in Olympics. In the ongoing meet, this was the second mixed event followed by 10m air rifle mixed. 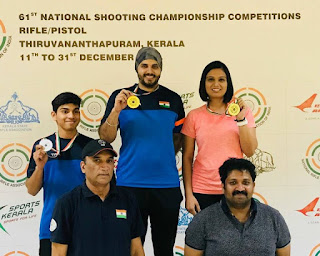 Congratulating Amanpreet for his magnificent win, LPU Chancellor Mr Ashok Mittal says: “We at LPU have all praises for Amanpreet. Prior to this, he has already pocketed many medals at ISSF (International Shooting Sports Federation) organized World Cup Shooting Championship and Commonwealth Shooting Championship.  We know that India has a lot of talent and one among them is at LPU in the form of shooting sensation Amanpreet. Identifying his deftness, we wish him to win Olympic Gold at Tokyo in Japan in the year 2020.” In fact, proving his shooting skills time and again, Amanpreet is establishing himself as unbeaten ‘Shooting Star of the World’.


The importance of the championship can also be judged from the participation point of view as world renowned shooters including London Olympics silver medalist Vijay Kumar; Pemba Tamang (Army); veteran Ashok Pandit (Maharashtra) and his son Ronak; Samaresh Jung (CISF) were among other 121 competitors at the championship.