A computer network is a group of computers linked to each other that enables the computer to communicate with another computer and share their resources, data, and applications.

An interconnection of multiple devices, also known as hosts, that are connected using multiple paths for the purpose of sending/receiving data or media. 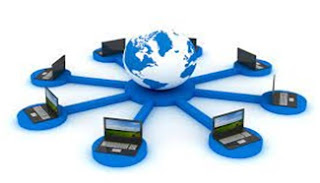 Communication - A network gives all users the ability to quickly communicate with each other using chat, instant messaging, e-mail, and videoconferencing.

Share hardware - Hardware devices connected to a network can be shared with all users.

Reduction in hardware costs – In Network that hardware devices that are not used very often like modem, printer, scanner etc can be shared. This is reduce the cost of hardware

Some important network components are:

Hub is a hardware device that divides the network connection among multiple devices. When computer requests for some information from a network, it first sends the request to the Hub through cable. Hub will broadcast this request to the entire network.

Switch is a hardware device that connects multiple devices on a computer network. A Switch contains more advanced features than Hub. Switch delivers the message to the correct destination based on the physical address.

Router is a hardware device which is used to connect a LAN with an internet connection. It is used to receive, analyze and forward the incoming packets to another network.

Modem is a hardware device that allows the computer to connect to the internet over the existing telephone line.